A micro-festival of new dance, presented by Word of Warning, Contact + Dance Manchester

####Order of Appearance (subject to change)
Rachel Sweeney | Driftlines (video programme, ongoing from 7pm)
This short dance film explores sense and synapses within a delicate ecology of rock, water, salt and skin. Driftlines follows a series of shifting perspectives held by both camera and dancer, captured along the Copper Coast shingle stretches of south east Ireland. Here, the camera follows a dancer’s physical immersion and tactile exploration of those arterial spaces that are left in the wake of coastal erosion. The movement and environmental sounds fuse with internalized sensations to create a kinesthetic experience moving from water to land.
www.orrandsweeney.com

™ Dance Company | Today
When we meet someone we meet all that they are and all that they will be. Desire and influences are the past and futures within someone. However, we meet them as they are today and yet we can relate to all these things which exist within the individual. Through story-telling, Capoeira, Hip-hop and Contemporary, Today delivers solid physicality and intricate duet work; exploring the performers’ journey from adolescence into manhood and beyond, it focuses on significant factors like the father figure, spirituality and culture. 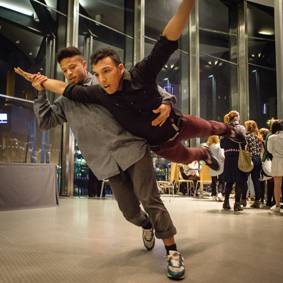 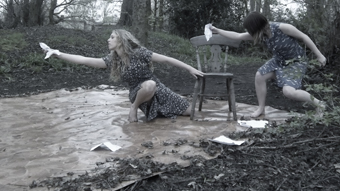 Joseph Mannion | Brotherly Love
A highly physical dance piece exploring the effect overuse of gadgets can have on individual’s personality. Intertwining Contemporary with Hip-hop + Jazz-inspired, the ranges from comedic to meaningful.

Thanks to original collaborator Bryn Gallimore for his flair, inspiration and energy.
http://josephmannionchoreography.weebly.com) | @JosephMannion_ 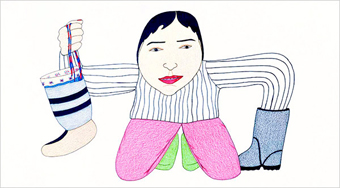 Phoebe Ophelia Douthwaite | The Land of the Blue Mist
I set off for the Appalachian mountains of North Carolina last summer with the intention of researching and developing my current skills in Appalachian step dance — my aim was to bring all the inspiration and skills I had picked up from dance teachers, friends, musicians and the mountains to create a solo piece which fused both traditional step dance and contemporary movement. Performed from feelings, thoughts and a life changing experience, the feel of the movement changes every time — not just because Appalachian step dancing is a freestyle form, but that new experiences and feelings are provoked every time I put myself back into The Land of the Blue Mist. 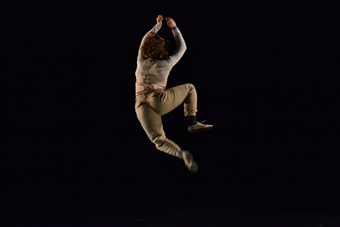 EdgeFWD Dance Theatre | REVOLT
Taking inspiration from the 1984 British miners’ strike, EdgeFWD presents a powerful, dynamic, splintering explosion of Northern, working class grit. Driven by a sound score mixing thumping 90’s rave and Grimethorpe Colliery brass band classics, Revolt takes a hard hitting look at what it takes to stand up and be heard, in a demonstration of unity and survival. 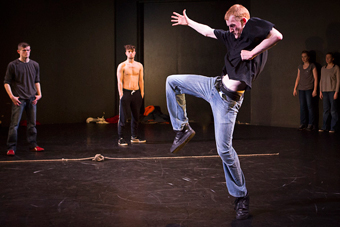 Victoria Sheldon | Who Are You Fighting Against?
A practical exploration into the collaboration of martial arts and dance. 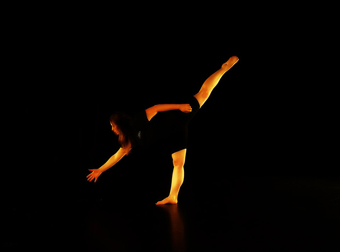 Dan Watson | Jacket Dance
We think there must be something seriously meaningful and interesting in the idea of ridiculous dancing. This performance is part-game, part-choreographed work.

Danced by: Dan Watson + Matthew Winston | Created by: Dan Watson with Rachael Mossom + Matthew Winston | Music: Neither One Of Us (Wants To Be The First To Say Goodbye) by Ruby Winters
Made possible by a Dance and the Homemade Commission from Chisenhale Dance Space, special thanks to participants of the workshop Play, Confusion and Ridiculous Dancing at Chisenhale on 13 April 2013.
http://danwatsonperforms.blogspot.co.uk | Dan Watson Facebook | @DanGWatson

Mixed Movement (from about 10pm, ends by 11.30pm)
Dance and live music combine, New York-style. The brainchild of dancer, theatre artist and poet DawN Crandell, Mixed Movement gives dancers and musicians a chance to improvise, celebrate and show off their skills.