Presented by Word of Warning, STUN + Z-arts during Emergency 2015

Please note this is primarily an adult event, see Access Info below.

Ali Matthews + Leo Burtin | The Best of Both Worlds
Stealthily scrounging your tax pennies, your guilty scratch card spendings, Matthews & Burtin are funded escapees. She from the cutthroat, self-made, individualist American dream. He from lukewarm, protectionist, socialist France. By air and by sea, and both to the best of both worlds: the UK.
Using 1930s French street songs, sales pitches, autobiography and live audience experiments, Burtin & Matthews take stock of what the UK values now and how we go about valuing it. 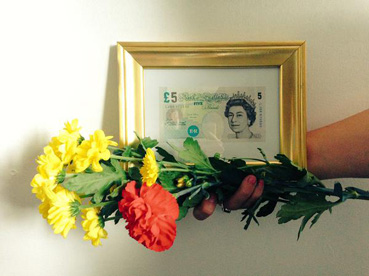 Ali Wilson | Sh*t Happens
How many cucumbers can you slice in minute?
How many nappies can you change before the kettle boils?
And what do you do when you find you’ve become a completely different person without even realising?
A new adventure can be liberating, but what if it starts to turn a sour?
Expect the unexpected is perhaps the vital lesson here.
Make yourself at home, but please don’t wear your shoes around the apartment.
@aliwil267

Chris Jenkins | ‘Comedy’ with Top Joe
We never actually see ourselves with our own eyes. We only ever see our reflections. Comedy is an autobiographical performance in which Chris Jenkins explores life, depression and desire through his comedy alter-ego Top Joe. 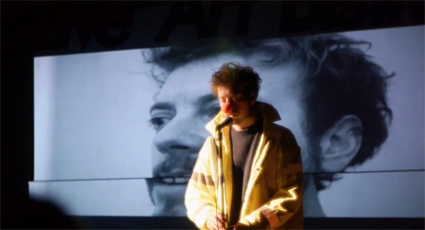 Dr Mango | The Third Island
Two men, two islands.
Matt and Greg have lost each other and are stuck on their own self-imposed islands; Matt is obsessed with taking unnecessary risks and leaving his life to chance, whilst Greg is stuck in a world of self-improvement and narcissism. They both need to escape but are unable to do it alone. If they could re-establish contact, if they could find each other again, then would they be able to pull each other out of their own problems?
@gregsaxton

Gareth Cutter | I Was A Teenage Volcano
Water boils at 100 degrees celsius. So does blood. Rubber melts at 180 degrees. Bitumen: 500. Steel: 1370. Without additives, quartz sand becomes glass at just 2300. The average human body temperature is 37 degrees celsius.
I was a teenage volcano. I didn’t wipe out an entire city. I never even erupted, really. But for five years, I grew a chest shaped like a mountain range.

Inspired by the journey to a surgical operation at the age of 18, I Was A Teenage Volcano is a part-fictionalised reminiscence of a time of sexual turbulence and emotional upheaval that makes the ground shake and brings the walls down.
Supported by an OPEN Bursary from Live at LICA.
http://garethcutter.com | @garethcutter 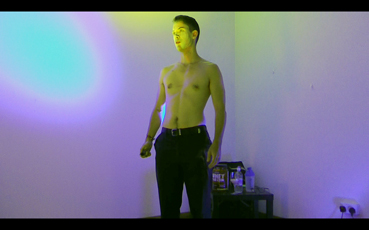 Howl Yuan | The Invisible Guest (performance)
He changed his English name several times…
A new production about crossing culture, lost identity, nationalism and mobility. Through physical movement, language barriers and military figures, identity is questioned within cultures, nations and persons. We walk, run or march through moving images, memory and scenery like a changing mirror, which lights up our homecoming — an impossible homecoming.

Thanks to Ben Francombe, Pete Phillips + Helena Hunter and all at University of Chichester without whose help, I couldn’t have made this work. 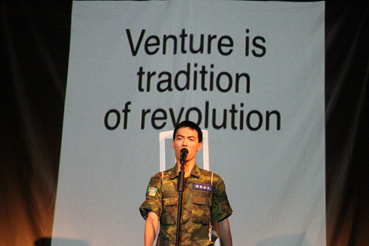 James O’Donoghue | Zero Point
A heroic little struggle using stand-up and Starbucks.
Globalisation has meant the presence of huge corporations in Aberystwyth that do not fit the town, nor do they respect its local businesses or residences. And yet, they still maintain customers. Zero Point is the trajectory of a comedian — from the opening joke, to the cheap divisive gag, to the failure of comedy, to its eventual return. It is despair and hope.

Tony Benn once said that progress is made by two flames: anger and hope.
Zero Point adds another flame: the flame of silliness.
@JAODonoghue 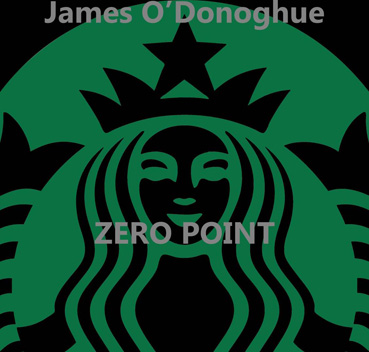 Jon M Coleman | How to be a Man
Men are in crisis. They don’t know how to be men anymore and they are trying to find the answers. What are the core values that a man should hold dear? Is manhood a choice? How does a man hug?
In this solo performance, one man (and two mannequins) attempt to navigate the various and often contradictory opinions on being a man. 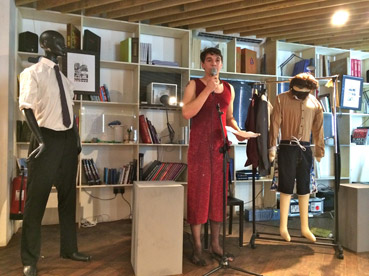 Lucy McCormick | Ascension Piece
Lucy McCormick presents a f*ckstep-dubpunk morality play for the new age. Casting herself as Jesus Christ, the artist attempts to ‘re-connect to her own moral conscience’ by re-enacting old biblical stories via power ballads and performance art, with the additional help of two professional backing dancers.
With trademark absurdism and enthusiasm, Lucy puts her best foot forward in the face of existential deadlock.
@lucy_muck 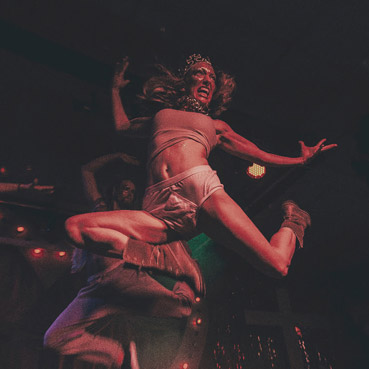 Stephen Donnelly | Sibling Audition (no longer appears)
A participatory theatre game show where the performer auditions the audience in a search for a new sibling. Inspired by the Yorgos Lanthimos film, The Alps.

Part of an ongoing project exploring the rituals we create to deal with loss, dealing with grief and the ways we help each other pick up the pieces.
@stdonnelly

Tin Can People | Remember Me
The smell is stained within the denim and thick within the smoke. The music is loud, the drums, even louder! Rock & Roll will never die and we will be remembered. Welcome to our little soirée. Tonight, we will go down in history! 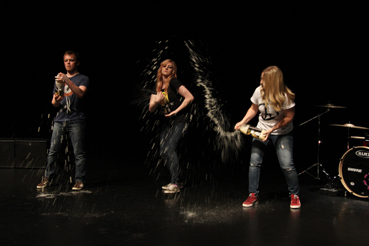 Emergency 2015 is primarily an adult-focussed event, some works will not be suitable for younger viewers (i.e. under 18s). From 12noon experience durational and limited capacity work; from 4pm onwards see a short series of short performances. It takes place in a number of different spaces and formats — some seated, some standing, some spoken word, some visual, some limited capacity, some participatory. We apologise but some of the work is not wheelchair accessible. For specific age and access information please email info@habarts.org or call 0161 232 6086.