A new satirical dance theatre work which investigates performance in differing contexts, the work sits peering over edges and meeting between the gaps of standard performance structures. 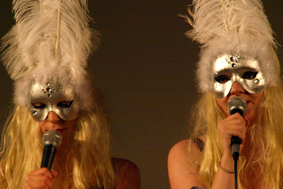 ####More
70/30 Split strives to produce work which looks at and questions the female body in performance, forming a creative process which enquirers and seeks to question the gaze and autobiography within a live performance context. Creating satirically energetic dance theatre work, as a pair they utilize movement, text, honesty and leotards, combining burlesque bodies and the bizarre.

####Who are they?
70/30 Split are Sophie Unwin and Lydia Cottrell, two York-based choreographers. After studying together at York St John University, they found themselves inspired and informed by each other’s artistic approach to performance making; both were invited back to their university to create a new work for the Create 12 Festival — the result of this process was their current and ongoing collaboration: 70/30 Split, a female performance duo. Together they present an accumulation of words, thoughts, characters, expectations, stories, experiences and alternatives.
Their recent work Content part 1: (2012) has been performed to audiences both regionally and nationally including: Leeds Light Night, Heads up! at Edinburgh Fringe Festival and Resolution! at The Place, London receiving encouraging responses from audiences as well as dance critics.

####What people have said about them?

Keep an eye out for the delectably cheeky, York based post-modernists Sophie Unwin and Lydia Cottrell, aka 70/30 Split, whose Content Part 1 was a complete giggle.
Donald Hutera, Dance Europe.

Catch this razor sharp pair while you can
Pete Wise, One&Other Magazine.