####In Brief
(rewind) and two goes back to the beginning of all of your love stories that could and should have happened, but didn’t.

Now, has just happened.
The man and the woman have just collided and they are just about to walk away.
This is where we rewind.
Past the strangers walking towards each other, past you willing them to have their happy ending, past the opening credits, past the choir singing, past the lights fading, past you finding your seat, past you preparing to take the role of an audience, to the moment the doors open.
And now, we can begin.

####More
The first in a trilogy of work developing a non-love, non-film, live performance that revolves around the moment two strangers collide; (rewind) and two goes back to the beginning, exploring the fusion of the mediated with the live and the frailty of memory, amidst the deconstruction of the role of the audience.

Now has just happened.
The man and the woman have just collided, their eyes have just met, they have just become each other’s thoughts, and they are just about to walk away.
This is where we rewind.
Her shoulder bounces from his arm and retracts back as her body straightens. His heel goes back to the floor and his toes rise. Her exhaled breath is re-inhaled and sucked back into her lungs. His saliva travels up from his stomach, back into his mouth and dissolves into his tongue. Her eyes un-process the image of his face as it passes through her retina and dissolves into light.
We keep rewinding.
Past the strangers facing each other as they walk away from one other, past them walking backwards into their houses, past waking back into sleep that morning, past them sleeping in reverse, past you wanting them to meet, past you willing them to have their happy ending, past the choir singing the air back into their mouths, past the opening credits popping and waning into the screen, past the lights fading on, past you leaving your found seat, past you preparing to take the role of an audience, to the moment the doors swing close to open the house.
And now, we can begin.

Wayne Steven Jackson creates “poignant, beautiful and clever” work. Melding film and liveness he confronts the fleeting moments of performance and explores ideas of memory and of being. He would like to take this opportunity to thank hÅb for nine years of continued support. 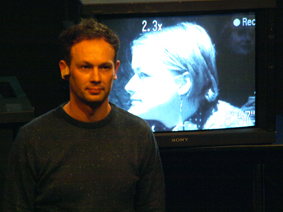 ####Who is he?
Wayne Steven Jackson was the three year old boy who swallowed a pound coin in his mum and dad’s bedroom, with cream walls, brown velvet curtains and a green carpet, in a semi-detached house on Ing’s Bridge, in Hull. He has also been a sales assistant, internet order dispatcher, caravan light fitter, restaurant manager, play worker, barman, sports coach, gambling machine technician, retail banking salesman, care worker co-ordinator, light haulage driver, paperboy, lecturer, and aerosol can sell-by-date checker. But he much prefers being an artist.

He has worked for nine years creating “funny, baffling, mystical, absurd and mind bending” work with Escape Theatre. Through continuing support from hÅb he has created seven pieces of live performance both with Escape and as a solo artist. He is currently exploring the relationship between live performance and memory, using video within his performances with intelligence and creativity as an aide to exploring his and his audience’s position to his work.