####In Brief
A foyer Hamlet in bubble wrap; and a meditation on leaving and staying-put.

##Michael Pinchbeck
####More
Inspired by Hamlet, The Middle is a one-man show devised for a theatre foyer — a liminal space between outside and the inside, the real world and theatre. Hamlet is a character caught in a limbo between To be or not to be; and by casting his father, Tony Pinchbeck, to play the title role, Michael hopes to explore time passing, aging and the relationship between father and son. 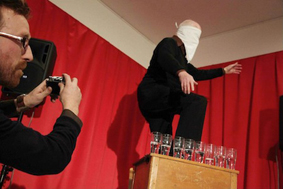 ####Who is he?
Michael Pinchbeck is a writer, live artist and performance maker. He co-founded Metro-Boulot-Dodo in 1997 after studying Theatre and Creative Writing at Lancaster University. He left the company in 2004 to embark on a five-year live art project­ The Long and Winding Road, performed at the ICA (London), Ikon Gallery (Birmingham) and the Bluecoat (Liverpool). Michael was commissioned by Nottingham Playhouse to write The White Album (2006) and The Ashes (2011), and was awarded a bursary by Theatre Writing Partnership and funding from the British Council to research a new play — Bolero.

He is currently working on a trilogy of devised performances inspired by Shakespearean plays: The Beginning, The Middle and The End. In 2008, Michael was selected by Arts Council England to represent the UK at the Biennale for Young Artists in Italy. In 2012, he was a creative ambassador for World Event Young Artists in Nottingham. His work has been selected twice for the British Council’s Edinburgh Showcase. He has a Masters in Performance and Live Art from Nottingham Trent University and is currently undertaking a PhD at Loughborough University exploring the role of the dramaturg in contemporary performance. Michael is a co-director of Hatch, a platform for performance in the East Midlands, and lectures at the University of Lincoln. 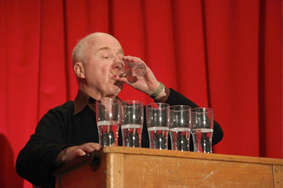 Pinchbeck is such an interesting theatre-maker
The Guardian

An individual practice that is powerful and compelling
ArtArtArt magazine

##Sheila Ghelani
####More
Rat, Rose, Bird explores empire, colonialism, mortality and love. Subtly mashing up cultures, curios, objects and ideas, the piece is a poetic meditation on farewells, departures, long journeys and “the hunt” — for a better life, a better love, a place to drop anchor or a space to claim (“finally!”) as one’s own.

Inhabiting the work as a kind of hostess/magician, Sheila reveals, explodes and mixes together a range of ingredients including champagne, rats, roses and birds in order to re-enact a set of memories, remembrances, exits and endings — over and over again.

Perhaps there’s something to be learnt by invoking the past? Or perhaps it’s nothing more than a series of repetitions?

Sheila Ghelani makes visually rich performance work that engages with ideas surrounding hybridity, migration and love. Her work has been shown at venues and festivals across Europe including Belluard Bollwerk International in Switzerland and The Wellcome Collection in London.

####Who is she? Sheila originally trained in dance before moving over into the world of Live Art/Performance. As an artist she makes work that manifests in a range of media (video, object, participatory event, performance etc). She works both as a solo and collaborative artist.

She has shown work at venues and festivals across Europe including Belluard Bollwerk International in Switzerland, Fierce Festival in Birmingham, NRLA in Glasgow, Trouble Festival in Brussels, EPAF in Poland and the Wellcome Collection in London. In 2010 she also produced a book/flower-press that was represented by KaleidEditions at UK art/book fairs.

As a collaborative artist she is a long-standing Associate Artist of Blast Theory and has toured and performed nationally and internationally for them and many other companies. She also teaches in academic contexts and regularly mentors artists and students and gives public talks.

Her work is informed by her own experience of being mixed heritage. She is interested in the relationship between art and science with particular focus on hybridity, crossings, blood, skins, skinning, carefully controlled experiments, colour, genetics and love.

####What people have said about her Two reviews of Rat, Rose, Bird at Chelsea Theatre in April 2013: Lara Tutton for The F-Word is here and Lewis Church for EXEUNT is here.