####In Brief
French film meets Edwardian vaudeville on a twisted voyage of consequences.

####More
Critically acclaimed imitating the dog (itd) bring their stunning fusion of digital projection and storytelling to play in their new touring work, 6 Degrees Below the Horizon.

In that strange meeting place between film and theatre, which has become the hallmark of their work, itd create a fable before our eyes as a man on his deathbed attempts to explain to his daughter why he abandoned her as a young child. Moving between the genres of the musical, cinema and vaudeville the audience are drawn into the shadowy world of a mythological European port peopled by sailors, pimps, barflies, policemen and nightclub singers. In this startling new work the audience view the action through a series of moving windows frames and piece together a modern fable of failed dreams, lost love and the guilt of absent fatherhood.

Building on the recent successes of Hotel Methuselah, Kellerman and their collaboration with Oldham Coliseum — The Hound of the Baskervilles, Leeds-based imitating the dog create an immersive experience for the audience in this fusion of cinema and theatre. Drawing on the works of Genet, Wedekind, Brecht and the photography of Pierre et Gilles 6 Degrees Below the Horizon takes its audience on a delightful and twisted voyage into a subterranean world in which doing the right thing is seen to have terrible consequences. 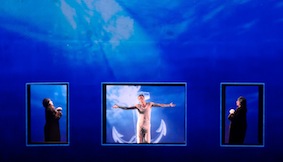 ####Who are they?
imitating the dog (itd) has been creating and touring original performance work since 1998. Over this period the company has built up a unique reputation, both within the UK and in Europe, for making high quality touring pieces of theatre that challenge theatrical convention and create exciting and testing viewing experiences for its audiences.

From the outset itd have been committed to developing innovative scenographic techniques that explore the narrative potential of theatre and to locate new modes of storytelling in a culture where the concepts of narrative linearity and coherent identity no longer seem to hold sway. The aim of the work is to be innovatory and, at the same time, making performances that are accessible to its audiences. The work aims to explore innovative dramaturgical techniques through incorporating new approaches in stage design, media and writing and it often draws on the aesthetics and fictional techniques of the cinema for its scenographic and thematic inspiration. The company’s overarching aim is to create bold and striking stories that are relevant to contemporary living, ones that focus on the ways in which the dynamics of violence, love, politics, what constitutes society, of having and caring for children, operate within a world where the decision as to what might be the right and just action seems increasingly hard to locate.

Since 2003 the creative core of the company, Simon Wainwright, Andrew Quick, and Alice Booth has been extended to include director Pete Brooks and designer Laura Hopkins. itd also work with core ensemble of performers that include Anna Wilson-Hall, Morven Macbeth, Laura Atherton and Adam Nash. This creative collaboration has witnessed the successful creation of four touring theatre pieces, Hotel Methuselah (2005), Kellerman (2008), 6 Degrees Below the Horizon (2011) and The Zero Hour (2012) all of which have been supported by Arts Council England funding. This work has toured throughout the UK and in various venues and festivals on the continent and all productions are still in the company’s repertoire. Hotel Methuselah has recently toured to The Lebanon, Brazil, and Ukraine, (supported by the British Council); Kellerman (KM), has recently performed in Taiwan as part of the Digital Performing Arts Festival, Taipei.

####What people have said about them
A 5* review of 6 Degrees at Contact is here.

… a mesmerizing piece of contemporary performance
Metro (on Kellerman)

####Workshop† Free to ticket-holders, itd are offering a workshop to accompany 6 Degrees…

This workshop focuses on a devising technique used by itd to make their shows. It explores the use of cinematic techniques in live performance without the use of technology. The workshop will take an extraordinary event as its starting point and encourage participants to explore the different ways in which the methods and language of film can be used in live performance.

Suitable for ages 15+ (most suitable for Further/Higher Education/Adult Practitioners). Free with a show ticket, book via Contact B/O: 0161 274 0600

####Credits
This production is supported by Arts Council England.