A disaster movie for the stage and a story of heroism told with lego.

Zilla! is a three-part disaster movie for the stage. A story of heroism and tragedy told with lego figures, dinosaur slippers, microphones, business cards and google street view.

By turns funny, sad, hypnotic and ridiculous, Zilla! is an epic attempt to look from a different perspective at the cities we live in and the cities we dream of.

####More
In part one we look at the city from above, imagining the people far below like ants. We choose our characters and watch from safety as the disaster unfolds in front of us.

In part two we watch and listen as the disaster is described by a lone figure in front of us. A duet for a single voice and google street view.

In part three we are invited out on to the streets, to imagine the same disaster as it might happen on the streets of our own neighbourhood.

“The show uses over 200 lego different lego figures. They have been given by friends and strangers, bought on ebay and collected from a series of boxes in my parents attic. The second part of the show has to be remade for every city that the show takes place in, which includes getting over 200 images of the city from google street view. Part of the idea of the show is to combine these deliberately ridiculous elements with writing and performance that is much slower and hypnotic, a gradual unfolding of the vast strangeness of the busy cities in which we live. I wanted to try and create a ghostly, sinister calmness that mimics the opening scenes of a disaster film in which the characters go about their daily lives, not knowing that disaster is about to strike.

“The piece was originally created as part of my PhD exploring the relationship between contemporary performance and the New York avant-garde of the 1960s and 1970s. As such not a lot of people know that the form of it (three parts, each the same story from a slightly different perspective) is deliberately borrowed from an incredible piece called Juice, created by Meredith Monk in 1969, which started off in the Guggenheim museum, before moving to a small Manhattan theatre a couple of weeks later and then ending up in Monk’s own loft-apartment.

“The main inspiration behind the piece was watching the film Earthquake a few years ago — a ridiculously over-serious disaster movie starring Charlton Heston as a retired American Football player and architect in Los Angeles — though other films that feature in some way include Towering Inferno (burning building), Dante’s Peak (volcano), Volcano (volcano), Independence Day (alien attack), Daylight (tunnel collapse), The Swarm (killer bees), Godzilla (mutant lizard) and King Kong (giant ape). However, the show is really about cities rather than disasters. Having grown up in the countryside in a very small village, I’ve always been fascinated by cities. They still strike me as strange and fascinating. I want to understand them better and I think that most of the things I make are an attempt to do so, one way or another.” 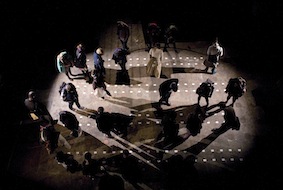 ####Who is he?
“The best place to find out more about me is on my blog, where I write various bits and pieces for no good reason which often find their way into my work. A lot of the text from Zilla! began as scraps of things on my blog.

“I am afraid of flying.”

####Credits
Zilla! was made with the support of Shunt, Stoke Newington International Airport and Apiary Studios. 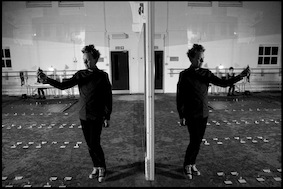