“Have you ever wanted to be somebody else? I always wanted to be Bruce Lee. And sometimes my dad. What determines who we are anyway?”

Straight from the Royal Opera House, with dramaturgy by Michael Pinchbeck and Eva Martinez, award-winning Hetain Patel delivers a visually arresting and witty consideration of culture and identity.

clever and charming The Guardian

####More
This piece began with Hetain wanting to recreate a scene from a kung fu movie that he loves. He knew it would be performative but without knowing whether it would become a video or live piece.

It became both: a video installation, The First Dance and also a live work: Be Like Water. The latter became a meeting place for Hetain’s live and video practice, which like TEN, his last live work, has been developed for the theatre.

But after TEN, Hetain knew he didn’t want to speak on stage in his own voice. To repeat this would have felt too comfortable. Instead he would speak in Chinese or use subtitles.

It started as a solo piece, but through a chance experiment with dancer Shelley Maxwell, things changed and Hetain became interested in asking a female performer to be his translator, avatar, or somewhere in between. 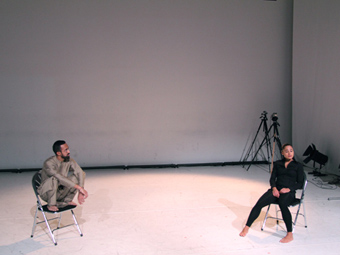 Conceptually driven, my practice begins with ideas about identity formation through the use of language and physical movement. This started with photography and the ritualistic use of culturally marked materials. Currently my work inhabits different forms including: photography, video and live performance. Working simultaneously across different media allows me the space to explore the multiple dimensions of a single idea, whilst also challenging the form I use. I also find the different communicative possibilities of different media allow me to reach different audiences.

Initially framing myself as the sole protagonist in what are often performative works, my practice is now increasingly populated by characters, both fictional and real, in relation to which I juxtapose myself in moments of elision and dissonance.

My work is not consciously political. Any explorations of identity are not statements but rather a result of ideas allowed to develop from their residence in my body. I almost wish to deny the burden of representation in order to engage with subtler layers of placing oneself in the world, often using humour as a way into this. Most recently this has taken form through the lens of imitation: an activity I find myself drawn to because of the requirement to listen acutely to someone or something outside of myself. This listening, in every sense of the word, feels like the key to a connection or exchange with someone else. I imitate my father, or somebody I’ve met, or equally DVD footage of Bruce Lee. 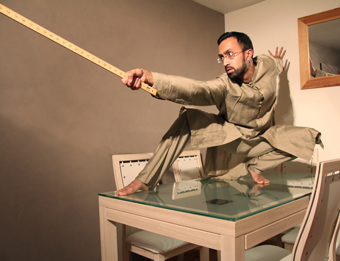 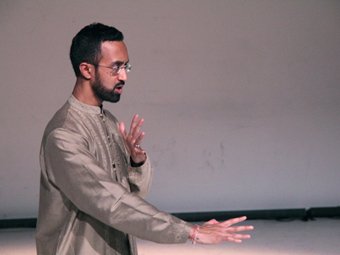