Kitty Graham | The Bare Earth
You stand before a bed of earth. Perhaps it is empty, still, peaceful — perhaps it is not.
Using a bed of earth — the place of death and decay, as well as creation and growth, and continual transformer of one into the other — The Bare Earth explores what might emerge when unconscious contents are freed in liminal ritual, and how these contents may be transformed by contact with consciousness.

Sarah Grainger-Jones | Soliloquy
A solo performance exploring the futility of language in the face of loss, Soliloquy references death, mediumship and the struggle to communicate silence.

Sophie Nathan | Lucky Me
A woman, dressed in cocktail dress, hair and make-up done, addresses a crowd at a lectern. “I just feel so lucky” she says. But the lectern is a prop and no-one is listening. You’ve never heard of her.
Lucky Me is a site-specific performance piece, which explores success, status and commodification of identity.

Fiona Anderson | Sweet Nothings
Fiona Anderson is currently in her final year of study at Edinburgh College of Art, within the Intermedia department. Sweet Nothings furthers her investigations into internalized social norms, focusing on views of how to be in love.

Moreno Solinas | URANUS
A performance for body and voice. Love and sex, need and fear, spirit and fluid. URANUS entertains the audience with song and performance, then sets them a challenge they werent expecting. 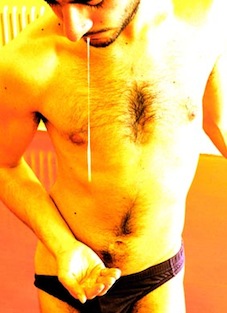 Megan Clark-Bagnall | Pool Out Of The Pool
Join Megan as she hosts the ultimate on land Pool Party! – an interactive performance that invites the audience to take part in a new aquatic sport (on land). Looking at the history of swimming since the 1930’s Pool Out Of The Pool takes the audience out of their seats on a playful adventure: you will experience how the table top ball game relates to the on land swimming techniques of the early 1930’s. Be prepared to stand up and have fun. 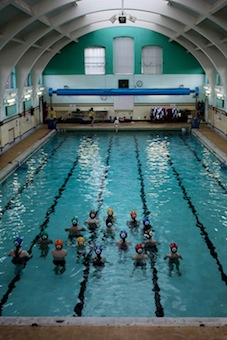 Facade Theatre | Dear Dave
Dear Dave is an overheard conversation, a conversation meant only for the closest of friends. Three women take their time over a bottle (or three) of wine to come up with the easiest, softest, kindest, most humane way to break it off with their male friend. It is that point in the dating game where you reach a fork in the road: you either take the bull by the horns and become someone’s life long partner, for better for worse, or you toss them out like a semi-used condom. As the women become more inebriated, the ways in which they break it off with Dave become more outlandish, more cruel and oh so more personal until the most self-assured of them takes it upon herself to test-run the breakup scenario on the closest male in situ. 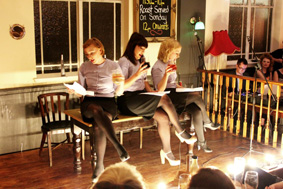