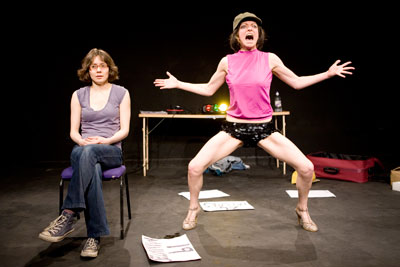 Together they play with failure, attempt, endurance, utterance, trashiness, the pathetic, triumph, mess. Based in London, they make theatre pieces and live art together… so far.

GETINTHEBACKOFTHEVAN:
Make: broken genre performance
Hold: a core belief in performance as dialogue
Assert: that text does not always say what it says that it says it is saying
Want: to transport you.

External is a must-see - Exeunt

Powerfully and unashamedly clever… I urge anyone with an interest in theatre to go and see this little gem. - Whatsonstage

An ebulliently ramshackle celebration - Time Out

Sharp, short, hilarious… External is undeniably accessible… a show you can read into endlessly and has you thinking about it well beyond the final applause. - Spoonfed

Be warned, GETINTHEBACKOFTHEVAN is Marmite, and I hate Marmite. - A Younger Theatre

Jen wants to talk to you. Lucy wants more. They’ve got some stuff they found in a garage, a strict no-touch policy and conflicting ideas about how to keep you happy.

Maverick makers GETINTHEBACKOFTHEVAN went to see a show where the performers wrote them letters. They didn’t write back – instead this unravelling game of truth and lies is their response.

Hear them talk about the piece here

External hurls a conversation about authenticity and originality right out into the open and forces it to fight for its life, giggling, gnashing and doing its own head in.

Let’s get the party started.