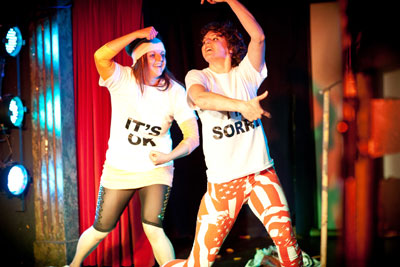 The Mustdashios are Genevieve Say and Rachel Entwhistle:
Genevieve trained at the Liverpool Institute of Performing Arts, and has since gone on to establish herself as a professional dancer working nationally and internationally. Genevieve combines her dance training with other influences, including clowning, theatre, film and live music, leading to an eclectic mix of collaborations including Collision (Lisi Perry), Gary Clarke, Flukt (Norway), Eee-Motion, Sweetshop Revolution, and Axial Dance.

Born and bread in Accrington, Lancashire, Rachel grew up around pies, football and bread and butter pudding. After deciding pie making wasn’t for her, Rachel instead went on to train in dance, working professionally as a performer around the UK and Scotland - with Lisi Perry (ex-Motionhouse/Scottish Dance theatre), Tids Pickard for EEE-Motion  and on the critics choice Scotland award-winning Jane Eyre at Perth Theatre.

Consistently absurd, uncompromisingly foolish, and committed to exposing the unruly side of dance theatre. The Mustdashios are no normal dancing duo. They offer a delightfully fresh approach to dance, comedy, and what it is to be a woman on stage. They’re daring and fearless in their choreography, insightful in their image making, and unashamedly grotesque whenever they find the opportunity. Focusing on the oddities of day to day life, The Mustdashios will simultaneously provoke your imagination, unweave your expectations and entertain the pants off you.

Chips delves into the friendship of two young women who live for booze and sequined pants. Through witty observations and discerning movement, Chips aims to expose the less attractive side of human nature whilst out on the tiles. Using Manchester city centre as their stimulus, the Mustdashios draw on their cheeky northern unabashedness to take you on a journey in which they dance, laugh and possibly cry their way through an intoxicated friendship.