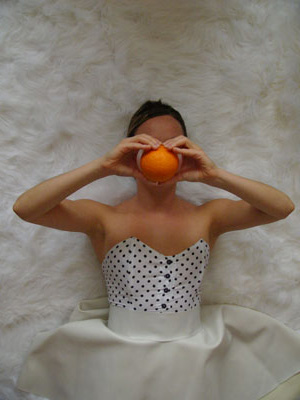 Originally from Greece, Eleni trained at Laban and MMU and has toured internationally with the Belgian based company Victoria and has performed in the Opening Ceremonies of the Athens 2004 Olympic and Paralympics Games! Eleni was the recipient of The Marion North Mentoring Scheme 2009, with Lindsey Butcher as her mentor.

Bethanie trained in Dance and Visual Art at MMU and has co-directed and co-choreographed LDT since the beginning. Bethanie has collaborated with art practitioners Andre Gingras and Anna Macdonald and has lead workshops in schools in the Northwest with “Charged 2 dance”. Bethanie was the recipient of The Bonnie Bird New Uk Choreography Award 2010.

Levantes Dance Theatre has a constant enthusiasm for fusing artistic disciplines and indulging in vibrant aesthetics. Current, bold and honest, the work visually explores contradictions: the mundane and divine, the absurd and the familiar in a kitsch cocoon of colourful activity.

Often challenging, their previous works have established Levantes Dance Theatre as one of the most innovative modern dance organisations in the country. A powerful critique of glorified normality, Gin & Satsumas is every bit as refreshing as the title suggests. - Aaron Lavery, Manchester Metro

Without a doubt one of the most intelligent, entertaining and generous works I’ve ever seen. We need more artists like this. - Silke Arnold, Creative Projects Manager East London Dance

They bring the stage space alive with their strong presence, and striking use of visual environments. This is certainly a company worth looking out for! - Sally O’Donnell, Leicester University, De Monfort       ####More

The story of gin and a lot of satsumas.

Returning by popular demand (oh, ok, mine!) in a one-off special, Gin & Satsumas was one of Levantes Dance Theatre’s first performance work which toured the North as part of In Transit in 2008 – but never showed in full in Manchester!

“… a surreal cocktail of sensation. Seeming like a circus, with its disappearing floor lights, trapeze wired objects and obligatory cartoon clowns, we are drawn into this incongruous spectacle by Levantes Dance Theatre. Visually stunning, this carnival cascade of cross-dressing strange-faced people doing strange-placed things is curious yet oddly pleasing.” - Mandy Richards @ Resolution! 2008