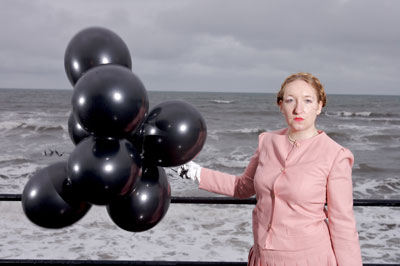 Ellie Harrison is a performance maker and artist living and working in Leeds. She creates a range of solo and collaborative devised performance work for studios, galleries, found and public spaces.

Following Dressing the Part Ellie went on to make Revolution! with Ollie Smith, a performance specifically designed for Vodka Revolution bars and commissioned by HATCH and Nott Dance. Ellie is on the Artistic Direction team of Pointed Arrow, making journey based public art projects including pushing a 1/2 tonne sailing boat 105 miles around the cities, villages and countryside of Yorkshire.

Etiquette of Grief is a gem of a show. Smart, funny, touching, and performed with real conviction. Ellie Harrison is definitely one to watch. - Robert Pacitti, SPILL Festival of Performance

Etiquette of Grief is a remarkable piece of work. The atmosphere was fantastic. Iʼm delighted to be given the chance to recommend this show. - Alex Kelly, Third Angel

I genuinely wanted to be brave enough to give you a standing ovation as I’ve never seen anything quite like it, either as meaningful or as funny - Audience feedback

Etiquette of Grief struck to the core of my own grief having lost a close relative this year. It is refreshing to watch a performance about grief and death that is not awash with patronising sentiment. I cannot recommend this performance enough - Audience Feedback

Etiquette of Grief is a step by step guide for how to cope with bereavement. Thousands of people struggled to cope with the deaths of Princess Diana, Jade Goody, Michael Jackson and even occasionally their own loved ones.

Ellie knows it can be difficult to express feelings of anger, sadness and loss. She would like to provide some moral support, Dutch courage and perhaps even a little musical accompaniment to help you at this testing time.

With inspiring messages from her digital alter-ego, interactive games and plenty of port, Etiquette of Grief unwraps our personal and national responses to grief and the grieving whilst celebrating the freedom of expression, even in our darkest moments.

Etiquette of Grief is the first piece in a sequence of seven works by Ellie Harrison entitled The Grief Series. Taking the seven stage Grief Model from popular psychology as a starting point, each instalment is a chance to collaborate with an artist working in a different discipline including performance, installation, photography and site-based work.

Part 2, The Reservation, a one to one performance for hotel rooms, is currently touring commissioning venues in Yorkshire and the North East. Part 3, What is Left, a participatory portraiture project is currently being developed with Manchester based photographer Roshana Rubin Mayhew.

Excerpt from The Grief Series Blog

After the outpouring of grief at Princess Dianaʼs death, it was suggested that Britain had begun to embrace a culture of tears. But the tears I see are on screen, and are provoked by reality TV evictions and failures. These tears are a commodity. They keep the ratings up, help Mr Cowells bank balance and provide a moving ending to each show. They are Oscar nominated tears. They are not the complicated messy tears of real life. They are an extreme response to the everyday rather than an everyday response to extreme situations. People are just as afraid of the live expression of tears as they ever were. The grief series is an attempt to make the expression of grief less scary, for the bereaved and those surrounding or supporting the bereaved. I use my own experiences of bereavement, of course I do but it is not just about me. I donʼt want the work to be a form of public therapy for me and yet I am not resistant to the possibility of therapeutic by products, as long as the work remains open and relevant. I hope that by making space to think, feel and talk our way round grief, with other artists and participants/audiences, that there may be positive emotional and social outcomes. It is about reaching people. - Ellie Harrison

Etiquette of Grief was made and is being toured with support from Arts Council England, Seedbed Trust and Leeds University through the Incubator Fund.