How does love exist when you’re not there? Live Letter is about absence, love, and your best handwriting. 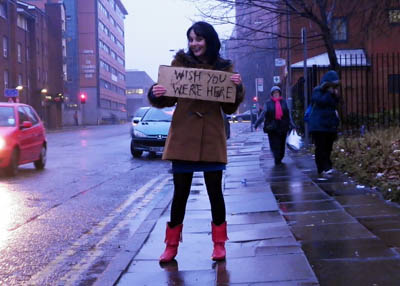 Ten years ago Lowri didn’t get into drama school so she studied art. She moved to Manchester, learnt to think sideways, formed a punk band and found her own way to make theatre.

Lowri is one of the most interesting emerging artists and performance makers in the North West - Richard Gregory, Quarantine, 2011

Lowri has a long history of putting her heart on the line. In the increasing blurring of her life and her work she has lamented about moments of goodbyes over train station tannoy systems, traced eighty year old school photographs and taken you for cups of tea on wasteland. She slid on the floor alongside you during rush hour in a slug suit; she told you everything in a book about the end of a relationship.

This performance is no exception. By working as close as she can between her own life and her art she knows they reveal something about the other, and hopes to delve into the grey ocean of what it is to be human, in all its cruelty and splendour.