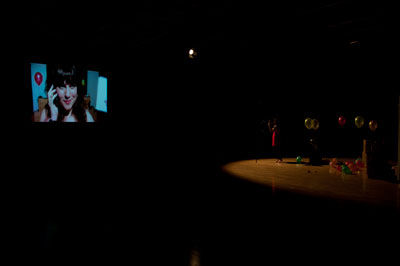 Olwen Davies is a performance maker, actor and writer, making her own work and acting in external projects, most recently an independent feature film 43 Pounds and performance company Zoo Indigo. Olwen trained at De Montfort University and co-founded the performance company Southpaw Junction. With an interest in the re-possession of cultural images on screen, comedy and the uses of recorded and live moments in performance, Olwen creates work that explores the audience’s relationship with the screen and with each other.

Olwen never expected to own a helium canister.

Olwen, the performer, is attempting to make a movie.
She is having trouble.
She doesn’t have the resources she needs.
She is not sexy enough, scary enough, entertaining enough.
She needs you to believe in her and help her discover the emotive direction needed.

Following classic narrative structures, referencing other famous movies and their characters, the piece takes a humorous and moving journey through bad re-enactment and the confessions of a lonely performer.

Fridge Logic explores and questions the audience’s relationship to the mediated performer within a media literate culture. For the 3 days leading up to the performance, watch optional videos that offer you a series of tasks to undertake in preparation for the show.

While creating the piece Olwen experimented a lot. She likes to play around when making work and have fun with it. While attempting something she thought would be wonderful she made a lot of mistakes. It turned out to be more interesting when she failed.

She wanted to make a performance that would set the audience up as a community, for them to feel connected not only to the work but also to each other because of what they were experiencing. Harking back to the communal experience of ‘appointment television’ when we all sat down to watch Top of the Pops or more recently the X Factor simultaneously, she set about creating that moment of simultaneous tele-connection.