The self-imposed isolation of a solo performer meets a love of cabaret in a show about obsession, loneliness, envy and the many ups and downs of ‘going it alone’. 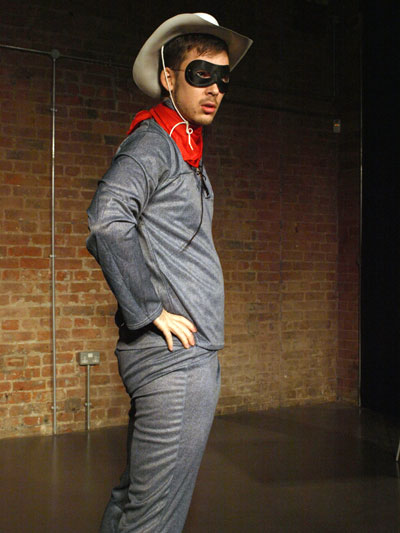 Involved in Manchester’s performance scene for over 3 years, running The Cabaret Of Ida Bucket, showcasing local acts at Mother’s Ruin and creating work with the likes of hÅb, Manchester Library Theatre and Larkin’ About. He combines clowning and physical comedy, music, writing and visual arts to explore serious topics playfully, creating homemade costumes and props that straddle the line between the ingenious and crude, work in parody and satire, exaggerate the best and worst aspects of my personality to absurd lengths and keep a straight face when doing stupid things.

Gareth Cutter is no good, chop him up for firewood - a lullaby his dad used to sing to him as a child.

Fleetwood Mac once sang, ‘You can go your own way’, but when the Lone Ranger parts from Tonto, he begins to realise that it isn’t always such a good idea.

The myths of the romantic artist and the trailblazing hero are picked apart by one solo performer who wonders whether such loneliness on stage and in life will get him to success quicker. He’ll dance, he’ll sing, he’ll perform – but what’s the point if there’s no-one there to support him?