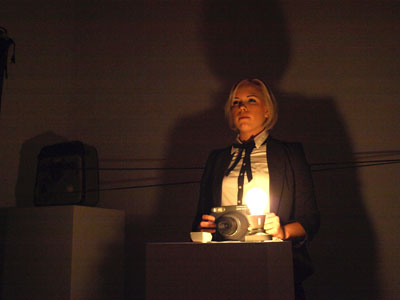 Based in the North West of England, Angel Club (north) have been making performance for 10 years in both theatre studios and public settings. Recent works include ‘Beyond the Sea’ (2008-2010) and ‘Obstacles to Coming home’ (2007-9) The company has presented at The National Review of Live Arts (Glasgow) and enjoyed a 10 year working relationship with ‘greenroom’. They  presented  the  finale of the last ever greenroom emergency in 2010.

Inspired by the cheerful pessimism of contemporary astrology and by our need to know we will be remembered…if only for a minute.

A journey around the hidden spaces of a theatre - one monumental installation, three intimate encounters…

October 2011 saw an extraordinary coming together of over 30 artists in a day-long maze of performance: emergency accommodation.  Two whole buildings resonated with small exchanges, moving installations and intriguing conversations, punctuated by naked encounters and full-blown performances. Recapturing that spirit of adventure, Works Ahead invites a group of the most intriguing emergency accommodation artists to develop and present their work in a takeover of Contact Space 1.