####In Brief
Real rockstars die aged 27. Ollie Smith is 26. He is not a rockstar. Yet. Sitting somewhere between a grubby gig, a fanatic lecture and a Jonestown-esque cult meeting, 27 is a darkly humorous show that stirs up the myths surrounding the notorious 27 Club: a group of legendary musicians who all died at just 27 years of age.

Tying fact together with fiction, speculation and conspiracy, the show fashions a tangled noose of self-destruction which chokes out the myths surrounding the notorious 27 Club: a group of legendary musicians who all died at 27 years of age.

Through a precise meandering of pseudo-philosophy and numerology, risk assessments and fading dreams, Ollie speculates on his own untimely demise as he struggles to secure his own legend alongside such greats as Jimi Hendrix, Jim Morrison and Amy Winehouse. 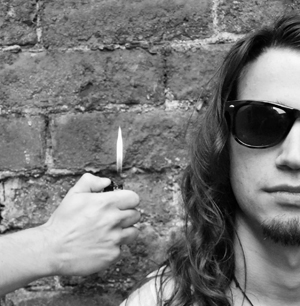 ####Who is he Ollie Smith is a live artist, theatre maker and musician based in Nottingham, UK. He makes performance work as a solo artist and as a collaborator. He has been a rock junkie since he was a child and has an extensive vinyl library - but his turntable is broken.

In addition to 27, Ollie has recently begun working on Cat in Hell:
“a kind of rock ‘n’ roll musical comedy in which a demon and a cat seem to be enduring (or inflicting on each-other) some implicitly eternal torment of frustration” (Wayne Burrows, writer).

Ollie trained as a performer at Bretton Hall and graduated in 2007 with first-class honours.